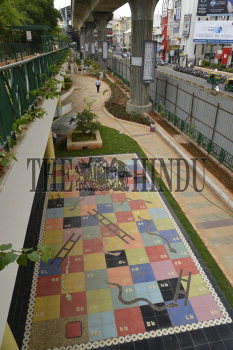 Caption : BANGALORE, 29/04/2013: The Rangoli Art Centre at the boulevard of Mahata Gandhi Road being developed by Bangalore Metro Rail Corporation Ltd. (Namma Metro, BMRCL), has many attractions, including Children's Play area which has a live Snake and Ladder board on the ground, in Bangalore on April 29, 2013. The refurbished boulevard of Namma Metro is set for opening in the first week of May. Photo: K. Murali Kumar