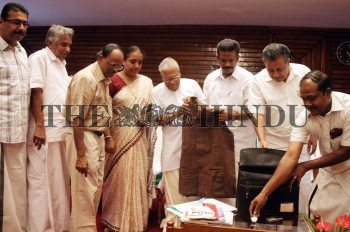 Caption : THIRUVANANTHAPURAM, 13/09/2007: The personal belongings of the former Chief Minister, E.K.Nayanar, were handed over to the Speaker, K.Radhakrishnan for display in the Assembly Museum by the state secretary of the CPI(M), Pinarayi Vijayan at a function held in Thiruvananthapuram on September 13, 2007. The function was attended by Chief Minister,V.S.Achuthanandan, Leader of the Opposition, Oommen Chandy and Krishna Kumar, son and Sudha, daughter of Nayanar. Photo: S. Gopakumar