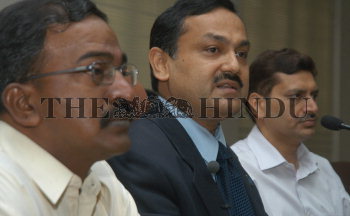 Caption : BANGALORE, 13/09/2007: (from left) Principal Secretary Agriculture and Horticulture A. Ramaswamy, National Project Co-ordinator, ILO Karnataka Child Labour Project Sanjeev Kumar and Head of the Department of Decentralization Institute for Social and Economic Change, Rajshekar at the inauguration of State level Workshop for the officers of Agriculture Department on the Elimination of Hazardous Child Labour in Agriculture at Vikasa Soudha, on September 13, 2007. Photo: V. Sreenivasa Murthy