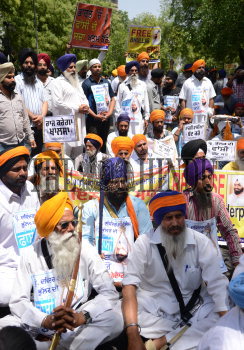 Caption : NEW DELHI, 19/04/2013: Sikhs protest against the Supreme Court rejection of a petition by Bhullar to change his death sentence to life imprisonment. Bhullar was given the death sentence, on August 25, 2001, for the September 10, 1993 blast at the Indian Youth Congress office that left nine people dead and many injured. Photo: V.V. Krishnan