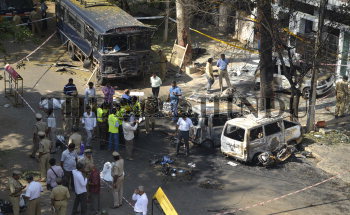 Caption : BANGALORE, 17/04/2013: Police and forensic personnel inspect the site of the blast near the BJP office at Malleswaram in Bangalore on April 17, 2013. The explosion, at a crowded residential area, left five persons injured, two of them seriously. Three cars and another vehicle were damaged. Photo: K. Bhagya Prakash