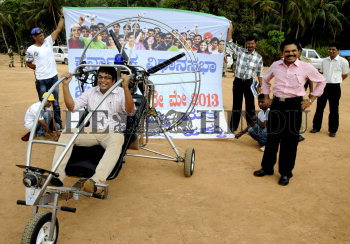 Caption : MANGALORE, 15/04/2013: Harsha Gupta, Deputy Commissioner having a feel of the Paraglider brought by Nikolai Singh (left) from the Meghalaya Paragliding Association whose services being hired by the Election Commission of India to create awareness among citizens in Karnataka to vote during the coming Legislative Assembly elections in Mangalore on April 15, 2013. Photo: R. Eswarraj