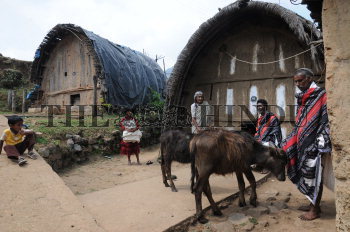 Caption : KERALA_KOCHI_16/03/2013.The Todas share a deep bond with their cattle, as is evident from the picture taken from a settlement near Udhagamandalam (Ooty) in Tamil Nadu, South India.The Toda people, one of the most ancient and unusual tribes of Nilgiri Hills of Tamil Nadu, are a small pastoral community who live on the isolated Nilgiri plateau. The Todas used to be a pastoral people but are now increasingly venturing into agriculture and other occupations. The tiny community has its own language (Toda language).They have their own secret customs and regulations. Todas worship nature like hill gods, Lord Amodr (the realm of the dead) & Goddess Teikirzi. According to the Todas, Goddess Teikirshy with her brother first created the sacred buffalo and then the first Toda man. The first Toda woman was created from the right rib of the first Toda man. The Todas are known for their embroidered garments called Puthukuli. Most of the Todas have large herds of buffaloes. Their livelihood mainly depends on producing milk products. And they are also experts in silver-smith works. The Todas live in small hamlets called munds. The Toda huts, which are of an oval, pent-shaped construction, are built of bamboo fastened with rattan and are thatched. This unusually small entrance is a means of protection from wild animals. Thicker bamboo canes are arched to give the hut its basic pent shape. Their temples are constructed in a circular pit lined with stones and are quite similar in appearance and construction to Toda huts. Photo: K_K_Mustafah