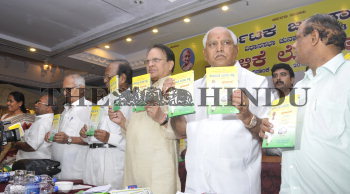 Caption : BANGALORE, 13/04/2013: Karnataka Janata Party's election manifesto released by its president B.S.Yeddyurappa and other leaders in Bangalore on April 13, 2013. He is seen sandwiched between K.H. Srinivas and Dananjay Kumar. Photo: K. Gopinathan