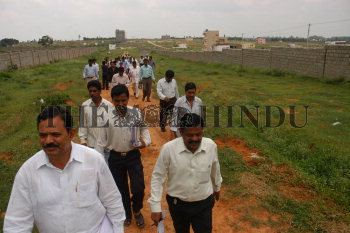 Caption : BANGALORE - 11/09/2007: A. T. Ramaswamy, Chairman, Joint Legislature Committee, formed to look into encroachment of Government land in and around Bangalore, going around along with the committee members and officials inspecting, a illegal layout formed on Govt. land, by son and brother-in-law of Major