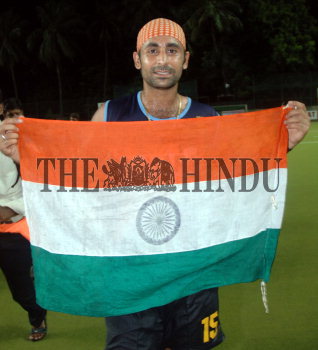 Caption : CHENNAI, 09/09/2007: Indian striker Prabhjot Singh, Player of the Tournament, celebrates with the national flag after India defeated Korea in the final to win the BSNL Asia Cup hockey championship at the Mayor Radhakrishnan Stadium in Chennai on September 09, 2007. India beat Korea by 7-2. Photo: R. Ragu