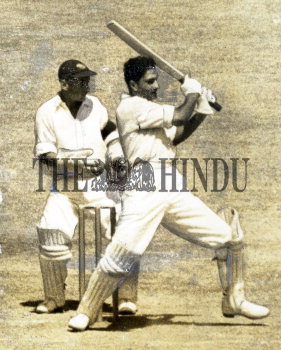 Caption : MADRAS, 09/02/1952: MCC IN INDIA, FIFTH AND FINAL TEST: P.R. Umrigar making a powerful hook of Carr during his brilliant century (130 not out) when India declared their innings at 457 for 9, on the third day of the Fifth and Final Test match against England at Chepauk cricket ground, Madras on February 09, 1952. SPOONER is the wicket-keeper. Photo: P.M. PaRThasarathy