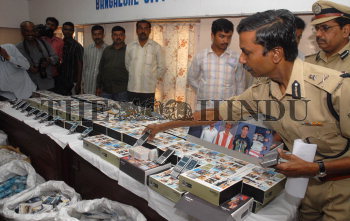 Caption : BANGALORE,10/09/2007:Commissioner of Police Neelam Achuta Rao (right), along with other officials, at a display of fake Nokia cell phones that were seized in Bangalore on September 10, 2007. Photo: K. Gopinathan