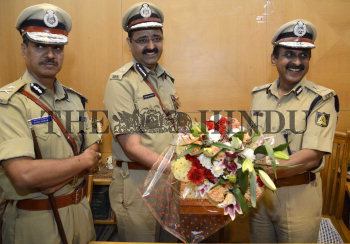 Caption : BANGALORE, 05/04/2013: Bangalore Police Commissioner B.G. Jyothiprakash Mirji (right) transferred as per the direction of the Election Commission. Home Secretary Raghavendra H. Auradkar (center) was posted in his place and directed to take over the charge with immediate effect as Commissioner of Police of the City. A scene during the handing over charge at Office of Commissioner of Police in Bangalore on April 05, 2013. Photo: V. Sreenivasa Murthy