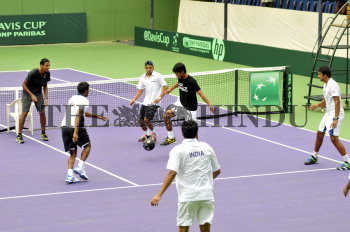 Caption : Bangalore: Karnataka: 04/04/2013: Davis Cup Asia/Oceania Group I first round play-off between Indonesia and India to be played at the KSLTA Stadium here from April 5-7. Indian team at a practice session. Photo: K.Gopinathan