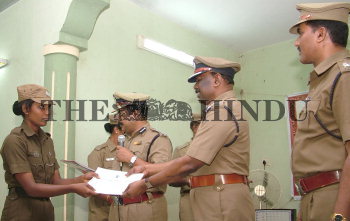 Caption : TIRUCHI:08/09/2007:DAILY: CAPTION: The Inspector General of Police, Central Zone I. Raja handing over a certificate to a woman police constable for attending a capsule course on Motor Vehicle Act and Rules in Tiruchi on September 8, 2007. The Deputy Inspector General of Police, Tiruchi Range Ashok Kumar Das (second from left) and Superintendent of Police, Tiruchi N. Rajasekaran (right) look on. PHOTO:R_M_RAJARATHINAM.