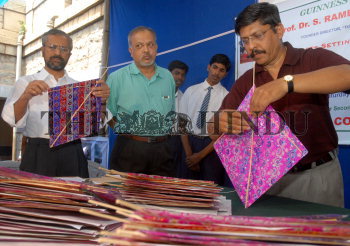 Caption : BANGALORE,08/09/2007: S.Ramesh Babu, a Metallurgical Scientist, with a doctorate from IISc, attempts at setting his 26th world record, by making "the fastest kite bridling in one hour",that is to bridle 60 square paper kites of size 12" X 12" in one hour, but finishing with 90,30 more than planned, in Bangalore on September 08, 2007 and Ramesh Babu, who wanted to be the Indian with the highest number of world records already achieved records in various fields. Photo: K. Gopinathan