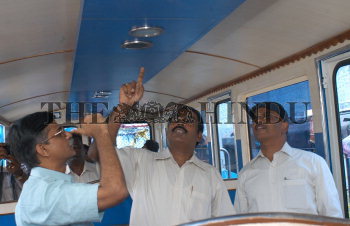 Caption : TIRUCHI, 04/09/2007: The Chief Mechanical Engineer, Southern Railway V.Carmelus (centre), having a look at the interior portion of the revamped Nilgiri Mountain Railway coach at the Goldenrock Railway Workshop, in Tiruchi on September 04, 2007 and the Chief Workshop Manager, Goldenrock Workshop S. Rangarajan (left) accompanies him. Photo:M.Moorthy