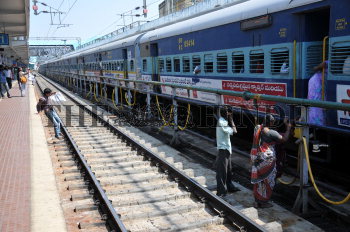 Caption : HYDERABAD,26/02/2013:Rail passengers crossing the tracks dangerously instead of using the foot-over-bridge and newly inaugurated escalators at Secunderabad RAILWAY on Tuesday, as RAILWAY Minister Pawan Kumar Bansal unveiled the RAILWAY budget in parliament. The RAILWAY, the country's largest employer with some 1.4 million people on its payroll, runs 11,000 passenger and freight trains and carries 19 million people daily. ---PHOTO:NAGARA GOPAL