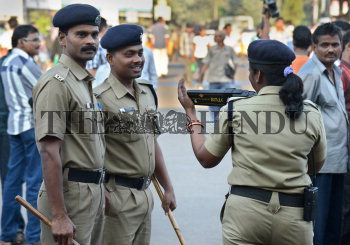 Caption : VISAKHAPATNAM, 26/02/2013: A woman Railway Protection Force (RPF) employee keeping vigil along with her male colleagues at the Visakhapatnam Railway Stationon on February 26, 2013. It is announced in Railway Budget 2013 that four companies of women RPF personnel and another eight will be raised for women's safety in rail stations. Photo: K.R. Deepak