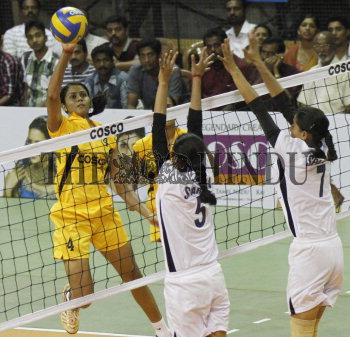 Caption : Coimbatore 25/02/2013. P.J. JOMOL (No:4) of Kerala places the the ball as Himachl Pradesh defenders Kumari Anjali and Shilpa Thakur go for the block in the Federation Cup Volleyball Championship at Rajiv Gandhi Indoor Stadium at Pramadom near Pathanamthitta, Kerala , on Monday. Photo:K.Ananthan.