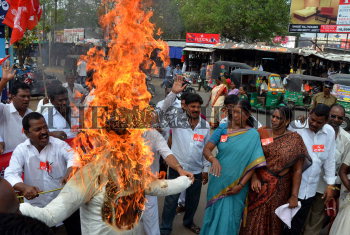 Caption : VIJAYAWADA, ANDHRA PRADESH, 22/02/2013:Wave of protest: Activists of CPI burn an effigy of terrorists during a protest against Hyderabad blasts, at Lenin Centre in Vijayawada on February 22, 2013. Photo:V.Raju