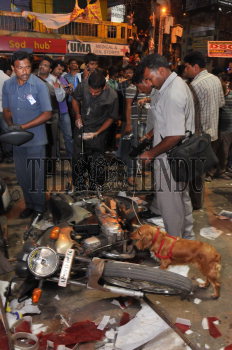 Caption : HYDERABAD, 21/02/2013:Sleuths belonging to the bomb disposal squad of the Hyderabad city police and the National Investigating Agency (NIA) at the blast site in Diluskhanagar on Thursday night.At least 11 people were killed and scores injured in two blasts near Dilsukhnagar in Hyderabad ,It appears to be a terrorist attack, though we have not yet got full information of the incident, while on the way to the blast site. Photo:Nagara Gopal