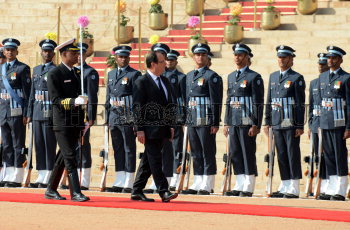 Caption : NEW DELHI, 14/02/2013: President of France, Francois Hollande inspecting a Guard of Honour during the ceremonial reception at the forecourt of Rashtrapati Bhawan, in New Delhi on February 14, 2013. Photo: V. Sudershan