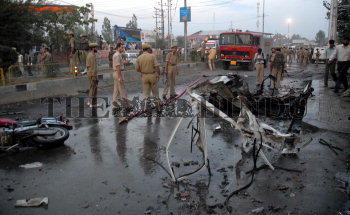 Caption : SRINAGAR, 01/09/2007: The scene in Srinagar on September 01, 2007, soon after an explosion ripped apart a car in the middle of the road. Five Border Security Force jawans and seven civilians were injured when suspected Hizb-ul-Mujahideen militants blew up an explosives-laden car in the Hyderpora locality. Photo: Nissar Ahmad