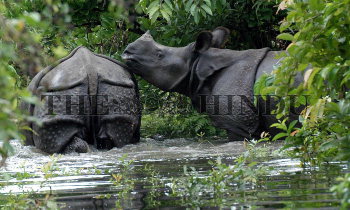 Caption : Two one-horned Rhinos wade through the floodwater in the Pobitira wildlife sanctuary in Morigaon district of Assam, 52 km away from Guwahati city on Thursday, July 10, 2003. Pobitira, which has the world's highest concentration of the great Indian one-horned Rhino, is inundated with10 feet flood water and all the animals have taken shelter in the high land areas inside the park. The overall flood scene remains critical throughout Assam and the death toll has increased to 18. The current spell of flood has marooned 2,163 villages and affected over 1.2 million population in the State so far. Over two lakh hectares of land including 58,911 hectares of crop area have been deluged in the flood. Photo: Ritu Raj Konwar.