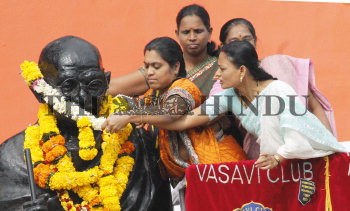 Caption : VISAKHAPATNAM, ANDHRA PRADESH, 30-01-2013: Members of Vasavi Club garlanding the statue of Mahatma Gandhi near GVMC on his death anniversary in Visakhapatnam on January 30, 2013. Photo:CV.Subrahmanyam