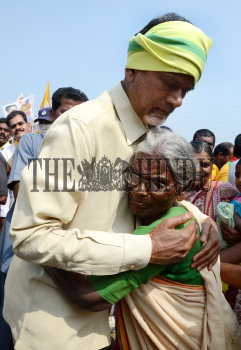 Caption : VIJAYAWADA, ANDHRA PRADESH, 24-01-2013: TDP Preisdent N.Chandrababu Naidu comforts a octogenarian woman who broke down into tears after he assured that the TDP Government would pay Rs. 600 pension per month, at Magallu village near Nandigama in Krishna district, on January 24, 2013. Photo:V.Raju