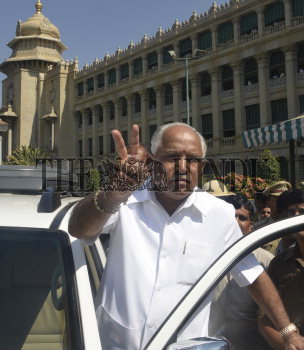 Caption : BANGALORE, 23/01/2013: KJP leader B.S. Yeddyurappa in front of Vidhana Soudha after meeting supporting MLAs at Speaker K G Bopaiah's chamber who went their to give resignation letters but they had to see empty chair since Speaker has gone to unknown place and he was not in the chamber at Vidhana Soudha in Bangalore on January 23, 2013. Photo: K. Bhagya Prakash