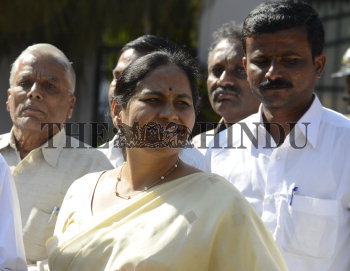 Caption : BANGALORE, 23/01/2013: MLAs of Karnataka led by State President of Karnataka Janata Party (KJP) Yeddyurappa's team who were resigned from their Minister post, Shobha Karandlaje and others coming out of Raj Bhavan after submitting memorandum to the Governor in Bangalore on January 23, 2013. Photo: V. Sreenivasa Murthy