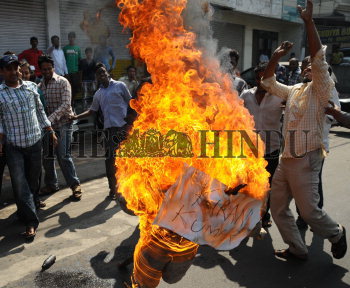 Caption : HYDERABAD, 22/01/2013: Agitators burned down an effigy Chief Minister of Andhra Pradesh N.Kiran Kumar Reddy while observing ?protest-bandh? at King Koti a day after Majlis-e-Ittehadul Muslimeen party President and Hyderabad MP Asaduddin Owaisis arrest and jailed for 14 days by a court in Sangareddy town of Medak district in a seven-year-old case.Shops and other business establishments remained shut down for second day in part of Hyderabad?s old and new city on January 22, 2013. Photo: Mohammed Yousuf