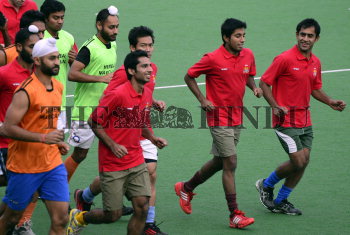 Caption : New Delhi, HOCKEY INDIA LEAGUE- 2013, January 15, 2013:: Pakistanii players representing Mumbai Magicians from right to left- Rashid Mohammad, Mohammed Tousiq and Fareed Ahmed along with captain Sandeep Singh and other teammates practicing on the eve of their match against Delhi Waveriders at the Dhyanchand National stadium in New Delhi on Tuesday. Photo:Rajeev Bhatt