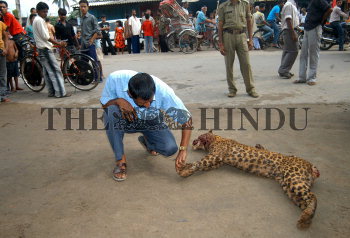 Caption : GUWAHATI, 28/08/2007: A forest official examines a female Leopard after being killed by the public at Garobasti in Segunbari Hill area in Guwahati on August 28, 2007. The leopard came down in search of food and entered in a populated area where it fell on a well. When people gathered near the well to rescue it, the leopard suddenly attacked and injured three people seriously. The angry public later killed the leopard with sharp weapons. Photo: Ritu Raj Konwar