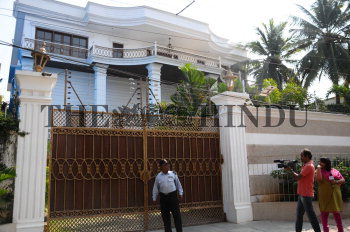 Caption : HYDERABAD, 04/01/2013: A copy of Sub-Inspector of II-Town Police Station in Nizamabad District is investigating officer served notice section 41A Cr.PC to MIM floor leader Akberuddin Owaisi's 'hate speech' that sparked a massive controversy and anger among many, seen pasted outside Akber's Banjara Hills Home before it was sent to MIM Party Headquarters for legal opinion in Hyderabad on January 04, 2012. A fresh complaint was filed against MIM legislator from Chandrayangutta who is reportedly in London for treatment. A national news channel crew filming Owaisi's residence. Photo: Mohammed Yousuf