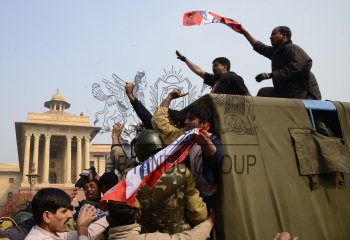 Caption : Telangana Vidyarthi Parishad activists being arrested on demanding a separate Telangana State at the Home Minister's office in North Block while Union Home Minister, Sushil Kumar Shinde was having meeting with All Party leaders of Telangana region, in New Delhi on December 28, 2012. Photo: Rajeev Bhatt