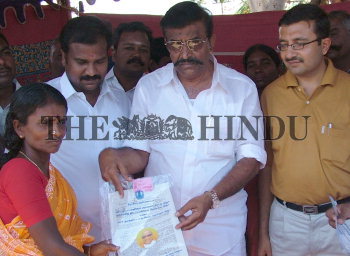 Caption : TIRUCHI:25/07/2007: K.N. Nehru, second from left, Transport Minister giving away a patta to a woman in Tiruchi on August 25, 2007. Ashish Vachhani, District Collector is also in the picture. PHOTO: R_M_RAJARATHINAM.