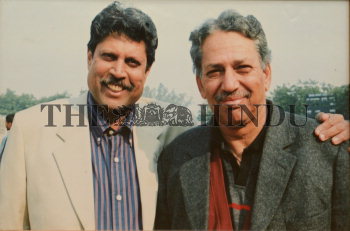 Caption : NEW DELHI, 24/12/2012: SARKAR Talwar with Kapil Dev, in New Delhi. SARKAR Talwar (born September 22, 1952 in Agra, Uttar Pradesh) is an Indian former cricketer who played first class cricket for Haryana as a right-arm offbreak bowler between 1967–68 and 1987–88. He finished with 357 wickets in his career with best innings bowling figures of 7/32 against Jammu and Kashmir, in New Delhi. Photo: V.V. Krishnan