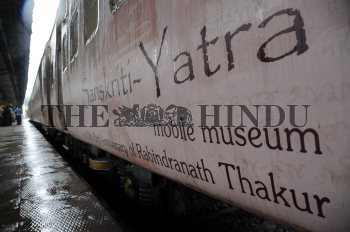 Caption : Bangalore:04/12/2012: WHATS IN A NAME:But when it involves nobel laureate Rabindranath Tagore it means a lot. ?Sanskruti Yatra?, a special train by Indian Rail on the occasion of Tagore?s 150th birth anniversary, reached Bangalore Contonment railway Station. But shockingly for a train that is supposed to exhibit his ideas and thoughts, the makers have the great man?s very name wrong. Tagore has been wrongly spelt as Thakur all over the train. Photo: G. R. N. SOMASHEKAR