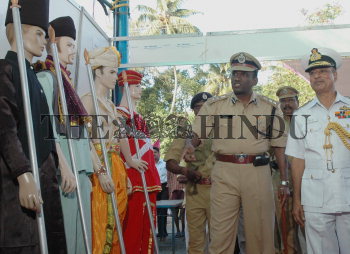 Caption : KOCHI, 20/08/2007: City Police Commissioner Manoj Abraham describes to Vice Admiral S K Damle, Flag Officer Commanding-in-Chief of the Southern Naval Command, the uniforms worn by policemen of yesteryears. These are among the exhibits at Suvarna Varsham, the 50th anniversary celebrations of the Kochi City Police, which is on at the Marine Drive, Kochi. Photo: H. Vibhu