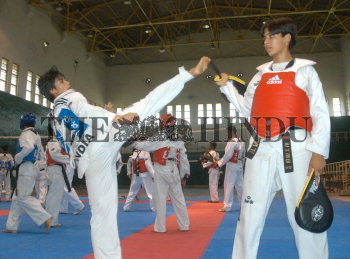 Caption : VISAKHAPATNAM, 18/08/2007: Trainees at the taekwondo National camp practice at the Ukku indoor stadium on August 18, 2007. Four juniors among the trainees were selected to represent India at the Asian junior takewondo championship to be held at Amman, Jordan from Aug. 20,2007. Photo: C. V. Subrahmanyam