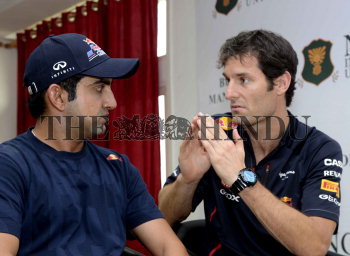 Caption : GREATER NOIDA October 24, 2012: Red Bull driver Mark Webber and Cricket icon Gautam Gambhir during an interaction with media at Greater Noida, about 50 kms from New Delhi on October 24, 2012. Second edition of Indian Grand Prix will be held at the Buddh International Circuit from 26-28th of this month.. Photo:Rajeev Bhatt