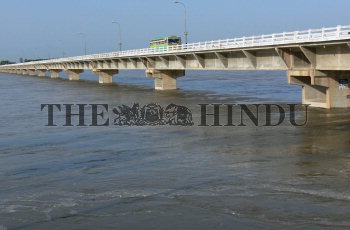 Caption : THANJAVUR, 11/08/2007: Water to the brim, the Kollidam river in Thirumanur bridge, in Thanjavur District presenting a beautiful spectacle and it is due to the surplus discharge from the Mettur reservoir as a precautionary measure fearing flood, in Thanjavur on August 11, 2007. Photo: M.Srinath