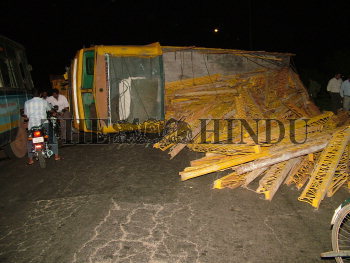 Caption : TIRUCHI, 09/08/2007: A lorry capsized at the Golden Rock overbridge in Tiruchi on August 09, 2007, causing obstruction to the vehicular movement on the Chennai Bypass Road. Photo: R.M. Rajarathinam