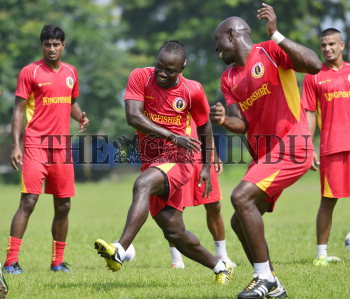 Caption : SILIGURI-29-09-2012 East Bengal?s EDEH CHIDI (M) along with other players during the practice session on the eve of the Federation Cup football final at BSF ground in Siliguri, West Bengal on Saturday, September 29, 2012. Final will be played between East Bengal and Dempo SC. PHOTO: RITU_RAJ_KONWAR