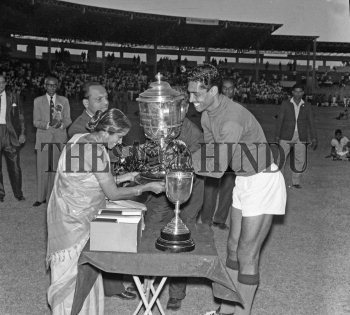 Caption : HYDERABAD: Railway’s skipper Thangaraj receives the Santosh Trophy from Mrs. Nambiar, wife of Mr. A.K.K. Nambiar, I.G. of Police and President, A.P. Football Association. The Railways became the champions this year when they beat Services by two goals to nil in the final of the 23rd National football championship at Lal Bahadur Stadium in Hyderabad on February 05, 1967. Photo: S. Asad