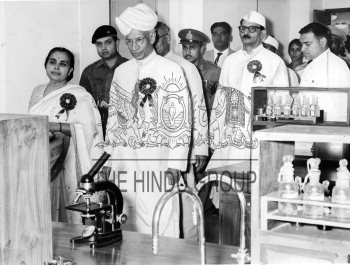 Caption : President S. Radhakrishnan inspecting the laboratory at the Dhanvantri Medical College at Pondicherry. He declared open the new buildings to house the college on July 13, 1964. Dr. Sushila Nayyar, Union Health Minister, is to the right and Mr. S.L. Silam, Lt. Governor of Pondicherry, is to the left of the President. The Union Minister announced at the event that the institution would be named Dhanvantri Medical College and Nehru Post-Graduate Centre for Research. PHOTO: THE HINDU ARCHIVES