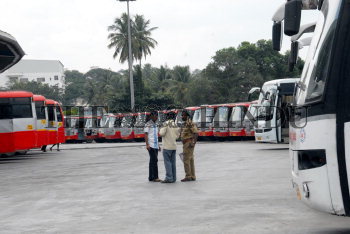 Caption : BANGALORE, 13/09/2012: A view at Satellite bus station on Mysore Road as a large number of commuters found themselves STRANDED following the strike called by the joint committee of trade unions of the Karnataka State Road Transport Undertakings, in Bangalore on September 13, 2012. Photo: V. Sreenivasa Murthy