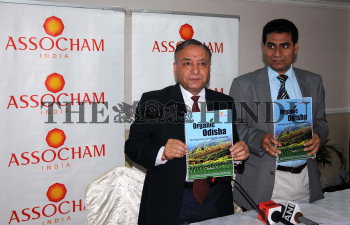 Caption : BHUBANESWAR, 12/09/2012: D.S. Rawat, Secretary-General of Associated Chambers of Commerce and Industry of India (ASSOCHAM), and O.S. Tyagi, senior director of ASSOCHAM, releasing the report on Organic Odisha: Inching Towards Organic Farming", in Bhubaneswar on September 12, 2012. The association's research has found that organic farming can create 80 lakh jobs in Odisha by 2017. Photo: Ashoke Chakrabarty