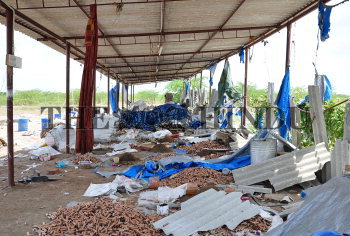 Caption : MADURAI, 10/09/2012: One of the working sheds of Om Sakthi Fireworks Industries, where a large stock of explosives blew up in which thirty-eight persons, including two women, were killed and thirty-three persons were wounded, at Mudalipatti, 13 km from Sivakasi on September 05, 2012. Photo: R. Ashok