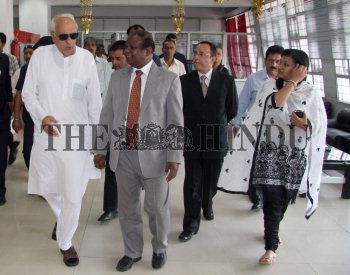 Caption : SRINAGAR, 01/09/2012: Union Minister for New and Renewable energy Farooq Abdullah with Chief Post Master General of Jammu Kashmir Circle John Samuel after inagurating Night post Office Servies at General Post Office Srinagar on September 01, 2012.This is for the first time that such a facility was introduced in the state. Samuel is the main behind revival and functioning of post offices in the state which were virtually defunct during last two decades of turmoil. Photo: Nissar Ahmad