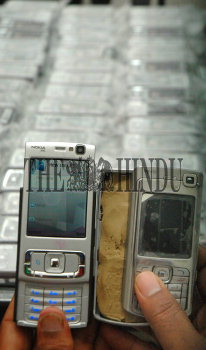 Caption : HYDERABAD, 02/08/2007: Fake models of high end phones were seized by North Zone Task Force sleuths in Hyderabad on August 02, 2007. These fake phones were filled with wax and passed off as original phones by a three-member gang. The gang cheated several people by showing them an original phone and sold them the dummy models packed in a box. Photo: Mohammed Yousuf